For decades, the United States has been undergoing a humanitarian crisis at the US-Mexico Border. Ironically, this crisis has been pushed towards the center of American politics due to Trump’s no tolerance immigration policy. Many Americans are unaware of the US’s role in perpetuating the forced migration of millions of families and unaccompanied children across Latin America from places like Mexico to Colombia. In March 2018, I went on a delegation to Southwest Colombia with Witness for Peace. For 10 days,  I learned about the impact of US policies in the region and how Colombian communities are working to build dignified and peaceful futures from the ground up, and I also recognized the connections between US policies in Colombia and Central America, particularly in relation to the current immigration crisis. The Colombia that I came to know starkly differs from the perceptions of Colombia, the often racist, dehumanized, and decontextualized perceptions on which US policies are based. 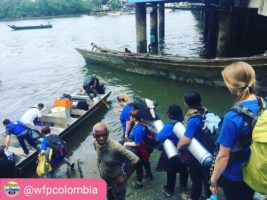 US Relationship with Latin America

Like most allies, the US and Latin American countries rely on each other for trade, defense, resources, and jobs. However, our relationship with Latin America is tainted with implicit racial discrimination, drug trafficking, mass murders, and economic disenfranchisement that has led to the forced migrations of thousands of peoples, many of whom have ended up in our inhumane immigration detention centers. The US-Colombia relationship while unique, mirrors many US-Latin American histories and policies, including Honduras, Cuba, and Mexico. The relationship is marked by a series of complicitous acts of violence against innocent people forcing them to leave their homes and cross the border for safety. Now more than ever, neoliberal proponents in the US are touting the benefits of free-trade and the “invisible hand’ as the pathway that will allow “underdeveloped” countries to compete with the rest of the world. These are the same policies that exploit the land, labor, and dignity of these countries and foster inequality. Neoliberalism is an intensive form of capitalism that strives to completely transfer all public services into the private sector, deregulate the economy, and rely on free trade. That could mean that welfare, healthcare, trade, and transportation are all controlled by wealthy corporations, instead of the people. Free trade agreements remove all the tariffs that protect a seller’s goods in the world market and prevents maximizing profits on a good that otherwise would not be beneficial to sell in the market at all. Alongside free trade comes privatization which allows an oligarchy to control the market, determining prices, accessibility, wages, quantity, ect. Once implemented these policies prevent mostly indigenous, and other small groups of people from protecting their own goods. In reality, neoliberalism only benefits the people already holding power and disregards the impact on people without a voice. In many Latin American countries, native people have been forced to reside in the outskirts of their own country much like America’s own native population due to these policies. Neoliberalism lets politicians use economic freedom as a justification for abusing and displacing groups of people.

US Relationship with Colombia

Since the U.S.-Colombia joint initiative of Plan Colombia (2001), the United States has contributed over $10 billion in mostly military aid to Colombia. I visited Buenaventura, a city in the Valle del Cauca that still faces the impacts of US policies. Buenaventura is home to a vibrant, peaceful social organizing community proudly lead by predominantly women leaders. They are working to combat the inequity between the well-maintained trade port and the hundreds of thousands of citizens that lack access to clean water, health care, and a life without fear. Outside of Buenaventura are the Nayan River communities, populated by Afro-Colombian and Indigenous peoples who continue to experience violence and displacement contrary to the US media narratives that note peace in Colombia. The leaders of the Colombia government continue to label children, families and entire communities like the Naya as connected to the insurgency, infiltrate these towns with their own military, and slaughter people in their own homes.

In 2008, then-Colombian President Uribe claimed the Naya was filled with cocaine and marijuana, incriminating innocent people, and putting their lives at risk. This misconception stems from Coca leaves, one of the dozens of ingredients needed for synthesizing cocaine. It grows naturally along the Naya River and contains medicinal properties used by local people. American stereotypes of Latin America and the purchasing of illegal drugs only worsens this reputation and increases the violence. Despite community advocacy to stifle drug-trade involvement, the US government continues to focus on a narrow drug trade narrative, pressing for coca eradication above anything else. In the past the US subsidized aerial fumigation of coca crops, a tactic which has resulted in polluted rivers, birth defects, and the indiscriminate killing of subsistence crops. As a result, people along the Naya River were forced inland to seek refuge which left the land in the hands of the government to disperse to politicians and business elites, exactly where they want it. 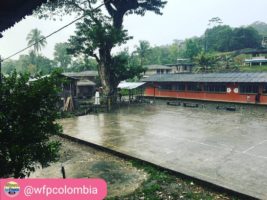 It’s hard to fight against these ongoing injustice when on paper Colombia has good laws that are meant to help Indigenous and Afro-Colombian communities gain and maintain titles to their land, but they are not implemented in practice. For example, the 1991 Constitution is supposed to recognize Indigenous and Afro-Colombian communities’ right to prior consultation for development projects on communally held land and Law 70 (1993) is supposed to provide mechanisms through which Afro-Colombians could begin to seek collective titling to their historical lands in the Pacific Basin (Grueso et al. 1998). Under the Obama Administration, The US started funding much of Colombia’s peace agreement that is suppose help rebuild peace but unfortunately still fails to hold the Colombian government accountable for implementing the peace agreements.

The government continues to allow elites to build tourist resorts on indigenous land and perpetuate fear  by continuing to assassinate local leaders. The State uses paramilitary groups to quells their protests, again lead mainly by women community leaders. Today’s political climate has heightened attacks on “free trade” agreements with a rise in Protectionist sentiment which only makes it even more difficult to hold the US government and its allies accountable for its role in causing some of the disparities in Latin American countries.  Many communities are often manipulated by large corporations to sow community division and take their land. For example, the La Esperanza community was displaced due to the armed conflicts, had their land usurped. Land that legally belongs to them is being negotiated and sold to “invaders” as future tourist attractions and vacation homes for politicians.

Today, the Colombian government portrays peace and stability to the world to benefit from global tourism and trade, despite continued state violence against Afro-Colombian and Indigenous communities. Meanwhile, the US sends millions to support a Peace Agreement that has yet to see fulfillment. The US undertakes the same types of policies I witnessed in Colombia as they both seek to dehumanize the “Other” for the sake of economic gain. As Americans we feed these dangerous regimes when we support toxic perceptions of immigrants as not belonging in the country that simultaneously lies complicit in their migration. We can support communities like the Naya, by not partaking in the illegal drugs trade, such as marijuana and cocaine, that encourage the groups that terrorize them. As tourists, we can take the time to research vacation locations and not spend money on resorts built on indigenous land. Finally, we have to pay attention to hold our leaders accountable. Our own actions or inactions will define how the humanitarian refugee crisis will carry out in our lifetime in not just our country, but around the world.

During this year’s Speaker’s Tour, Neesa spoke about Centro de Derechos de Mujeres CDM in Honduras, women’s resiliency, self-care, reproductive rights, and the struggle against injustice, violence and militarization. In her talk, she addresses the invisibility of Honduran women’s struggle across the migratory circuit, and the need to combat systemic violence through feminist empowerment, the intersections of militarization, gun violence and rape.

Each fall, Witness for Peace Southeast coordinates a speaker’s tour in the southeast. Latin American community leaders and activists travel to the U.S. to raise awareness about key policy issues in Latin America. Past speakers have spoken out about the war on drugs in Colombia, the violence against Afro-Colombian communities, and the impacts of US deportation policies on deported youth in Mexico. The tour visits churches, universities, and community centers to share their stories and urge for reform. Latin American speakers humanize the policy issues, encouraging people to fight for policies that respect human rights and dignity.

This October, we hosted Nicaraguan Fair Trade advocate Julia Vallejos, a founding member of Masili, a workers-owned, fair-trade, women’s cooperative operating in the Free Trade Zone in Nicaragua. In 1998, Hurricane Mitch flooded her community in Lake Managua, and the entire town was forced to leave their homes and livelihoods behind. After being relocated to a refugee community, many people found work in Free Trade Zones – huge textile factories owned by foreign corporations and contracted by foreign companies. Though they provide employment, the factories have a reputation for poor labor conditions where workers are paid very little and work long hours, and the profit always remains in the hands of foreign corporations.

Julia began meeting with other displaced women, and together they decided to form a worker-owned cooperative factory. With the help of Jubilee House, a U.S-based NGO, the women established Masili, a fair-trade organization operating in the Free Trade Zone. Though it can be difficult, the workers remain committed to fair labor conditions and the use of only organic materials.

We had 36 total events, and engaged with over 1,000 people, as well as many more through our online communications. Thank you for your support during our Tour!

Welcome to WordPress. This is your first post. Edit or delete it, then start blogging!

Witness for Peace Southeast seeks to achieve change in our core issues through a variety of activities. There are plenty of ways to get involved.